A range of agreements for strategic partnership between FLC, Bamboo Airways and international partners were registered at the Investment Promotion Forum jointly held by Vietnam Embassy in Germany and FLC Group on March 8th, 2022 in Frankfurt (Germany) 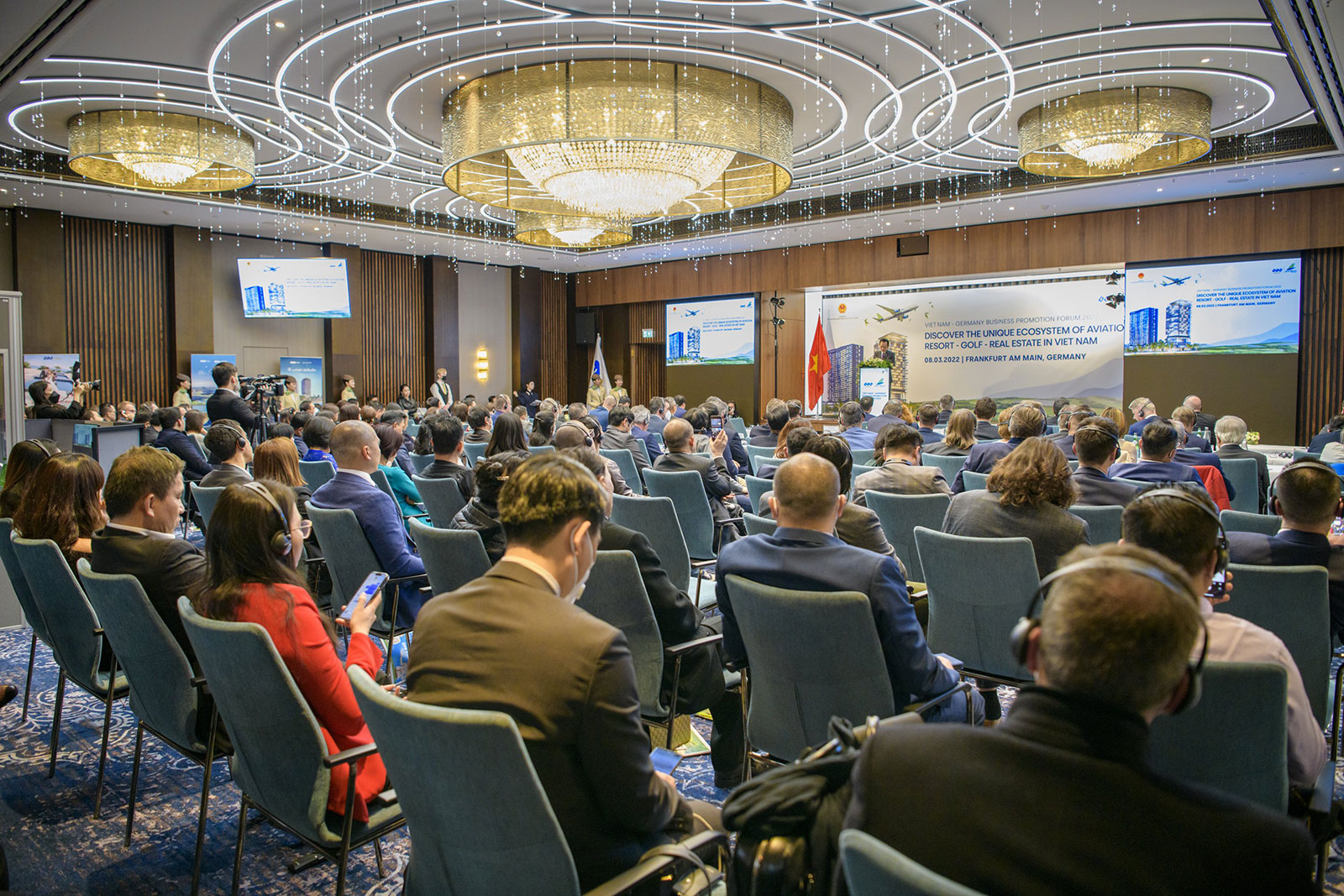 The event withnessed the attendance of nearly 300 senior leaders, investors, financial institutions, investment funds and businesses, press and media agencies from Germany, Vietnam and many other countries.

Speaking at the event, Mr. Dang Chung Thuy – the representative of Vietnam Embassy in Germany indicated that Germany had been Vietnam’s leading commercial partner in the EU, and that Vietnam had also strived to become the most significant commercial partner of Germany in the Southeast Asia after over a decade of strategic incorporation.

Such achievements are embraced by the reckless effort in connecting the Goverments of the two countries, as well as a strong desire of the business community within each nation for incorporation. In practice, many large enterprises in Vietnam have been increasingly enthusiastic in looking for partnering and collaboration opportunities with the purpose of meeting strict demands of the German and EU markets. A typical example remains with FLC Group – a proactive enterprise with significant contribution in the fields of tourism infrastructure, aviation and real estate. 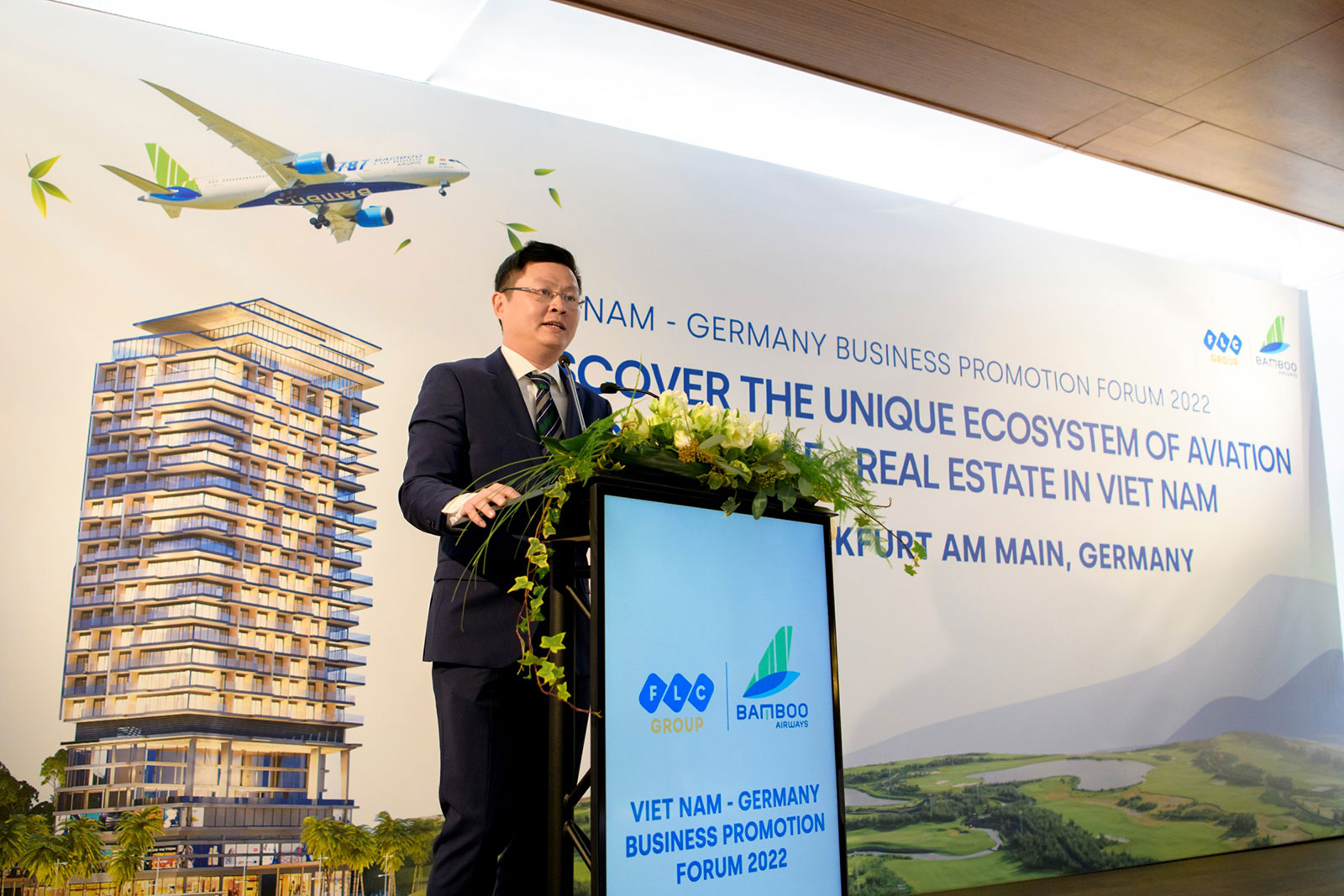 With regards to the the decision of choosing Germany as the first destination for a series of international promotion activities in 2022, Mr. Trinh Van Quyet – Chairman of FLC Group emphasized that Germany has established itself as an extremely potential marklet following the residence of more than 200,000 Vietnamese people.

“Bamboo Airways has built a bridge that connects Vietnam with the largest airport in Germany. That is Frankfurt Airport. At the moment, Germany and Vietnam have had the disease well under control, followed by policies for safe resumption in order to attract investment and place everything back to the normal state. Since the organization of this event today is considered to be crucial, it should and has to be done”, affirmed Mr. Quyet. The Chairman of FLC Group also revealed that Bamboo Airways will rapidly expand the flight network to other major cities of Germany, and thereby turn the country into one of the most imperative markets of the Airline in the Europe. 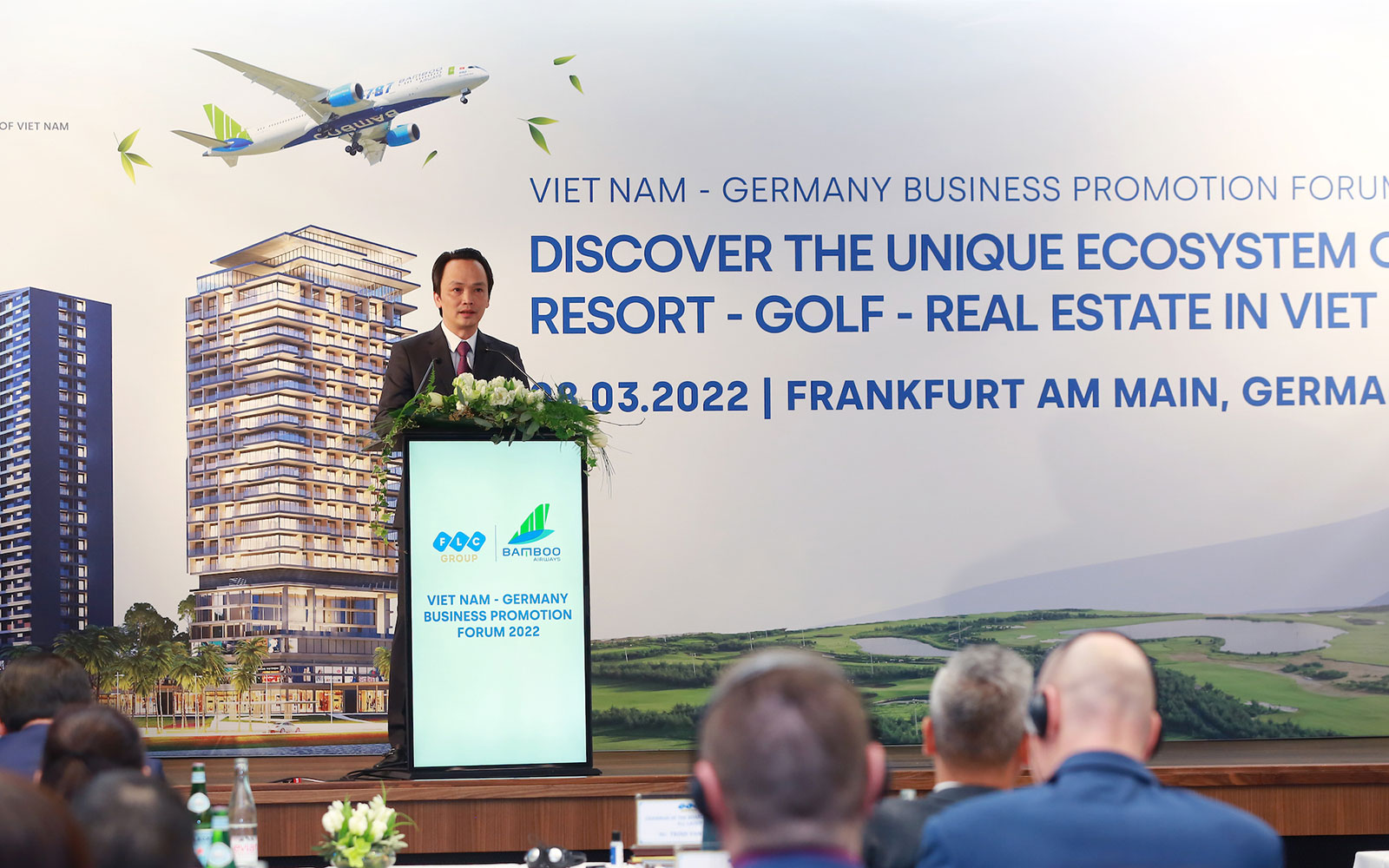 According to Mr. Roft Schulze – Former Ambassador of Germany to Vietnam and President of the German-Vietnamese Friendship Association, FLC and Bamboo Airways have been adequately taking advantage of the opportunities derived from the strategic partnership between Vietnam and Germany. He believes that Bamboo Airways launching the flight route to Frankfurt is a significant factor that allows the relationship between the two nations further strengthened.

“I am very delighted, and I have made a request to the Chairman of FLC Grouup that it is of high necessity to launch flights to Berlin and Munich soon. When it happens, I will definitely be the first one stepping on the plane flying from Berlin to Vietnam”, added Mr. Roft Schulze.

At the event, the information associated to FLC’s ecosystem had attracted massive attention from German senior leaders, representatives of ministries and business community.

Among those, Bamboo Airways has been preparing to open flights to Berlin and Munich in order to foster tourism incorporation between Germany and Vietnam. Cargo flight network is also expanded by the Airline to provide access for more German products to Vietnam, and in the reversing way that sees agricultural products of Vietnam can improve the export to Germany, which is considered as the most potential market in the Europe. 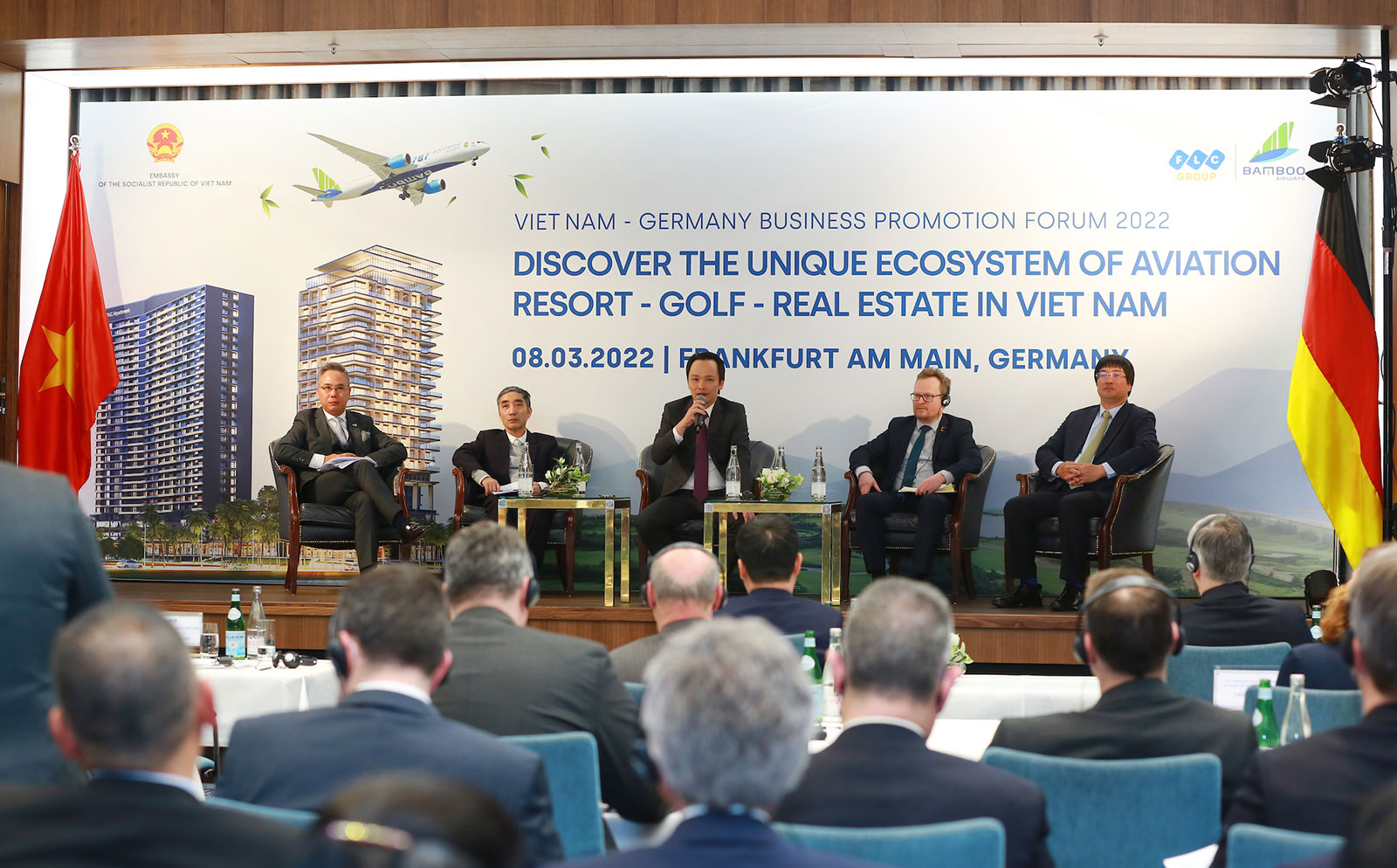 Many German investors expressed their interest in the investment towards tourism and resort real estate in emerging markets of Vietnam.

Expressing the interest in the investment towards tourism, resort real estate in the emerging markets of Vietnam, many German investors raised questions about investment attraction-related policies as well as necessary assistance from FLC Group for them in such markets.

In accordance with Mr. Dang Tat Thang, many projects of FLC have contributed to activate the tourism potentials in the emerging market, and correspondingly resulted in massive benefit for the investors. FLC has been active in investment research and legal promotion process for more than 300 projects all over Vietnam. Mr. Thang indicated that this is a true opportunity for German investors to incorporate in project development, management and operation across the resort complexes that possess the most comprehensive investment in Vietnam.

In further support of the aforementioned indication, Mr. Trinh Van QUyet – Chairman of FLC group reckoned that German businesses that wish to invest in the Vietnamese market must consider the comprehension over investment policies and procedure in the hosting country to be vital.

Following the experience in the investment in 58 cities and provinces in Vietnam, FLC is ready to provide necessary assistance and consultation for effective investment in Vietnam disregarding the type of sector. “We want German businesses to have a better view and understanding of  Vietnam’s 100-million-person market, one of the most attractive markets in the Southeast Asia”, shared the Chairman of FLC Group. 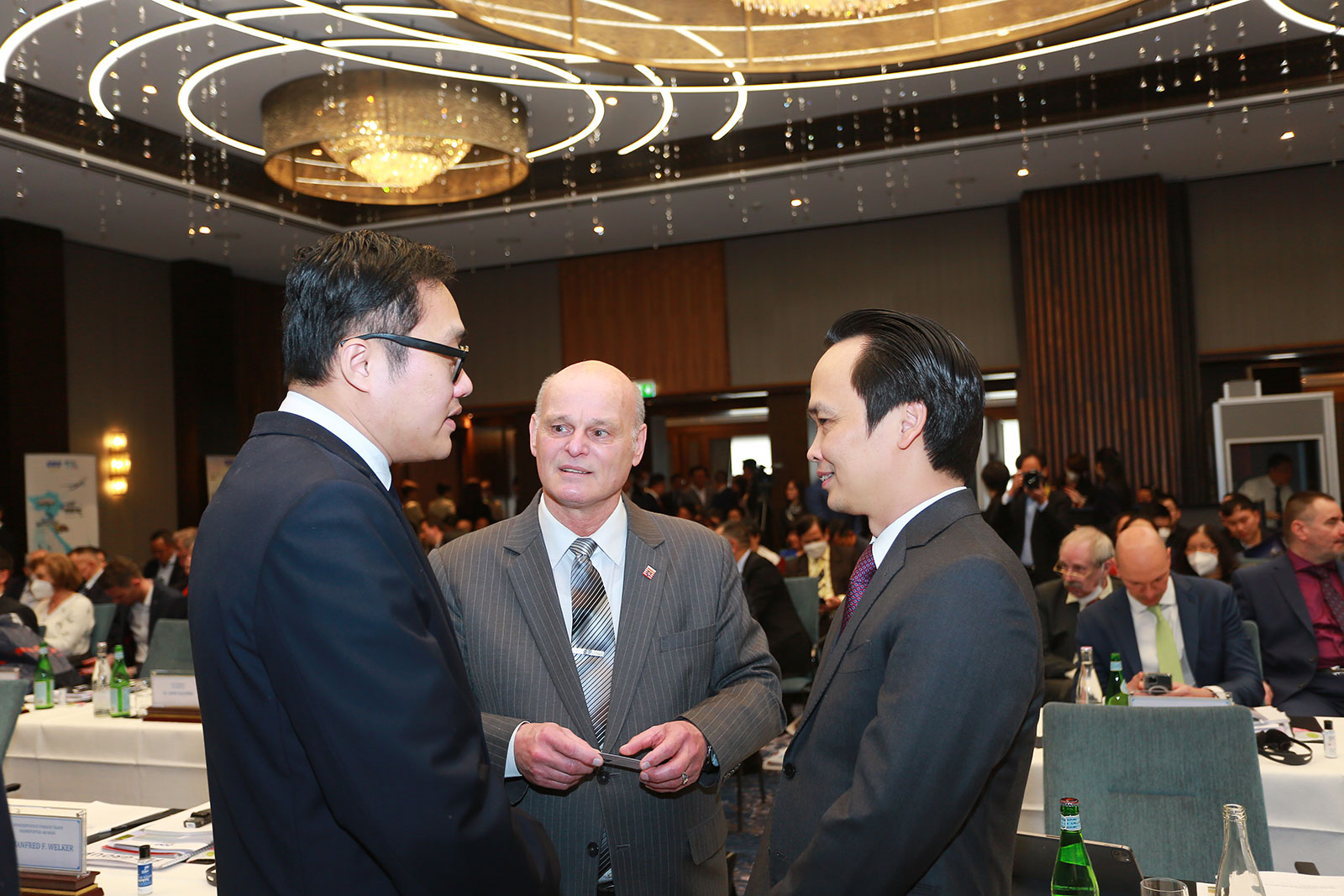 Mr. Trinh van Quyet – Chairman of FLC Group speaking to the guests at the event

Collaborating with many strategic partners

After the event, it is expected that Bamboo Airways will continue registering partnership with Air France Industries KLM Engineering & Maintenance (AFI KLM E&M) for engine support and maintenance. 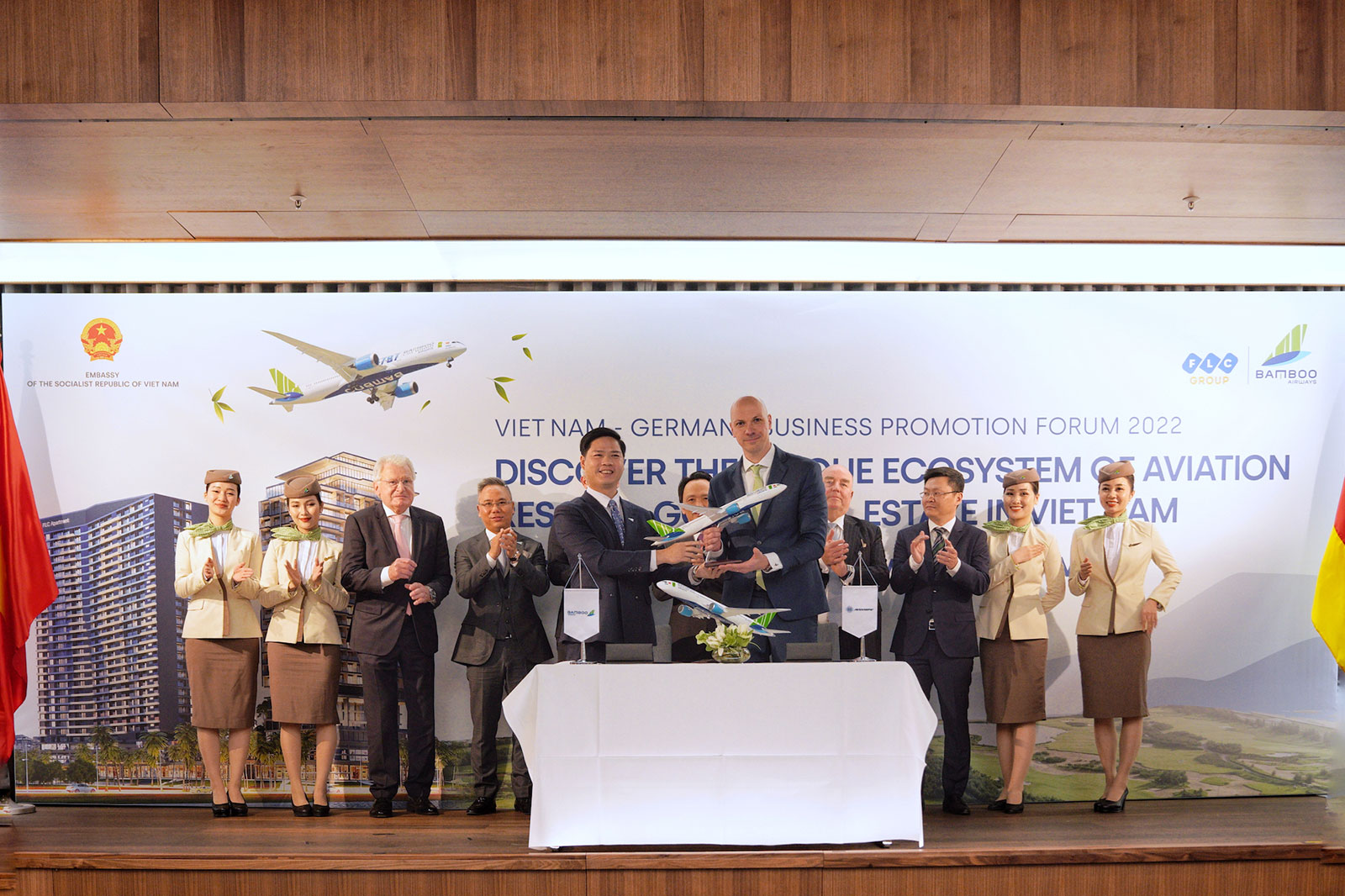 Once completed, the agreements will act as a solid foundation allowing Bamboo Airways to improve the service quality, and simultaneously promote its activities in a powerful manner within the German market in particular and the Europe in general.

The investment promotion week organized by FLC Group in Germany is the start of many international promotion activities that have been planned for 2022. The next important event is going to be the Vietnam Week in the UK, held at the end of March.

Previously, a number of large-scale roadshows were consecutively organized by FLC in the US, Singapore, Korea and Japan markets thoughout the period 2017 – 2019 and had witnessed great attention from partners and investors. Importantly, these roadshow events have set a platform for FLC’s journey to connect and promote investment in key international markets.