“If you fly to a city where FLC Group’s hotel and resort is located, you will immediately think of Bamboo Airways and 5-star quality services,” Mr. Trinh Van Quyet answered Economy Chosun. 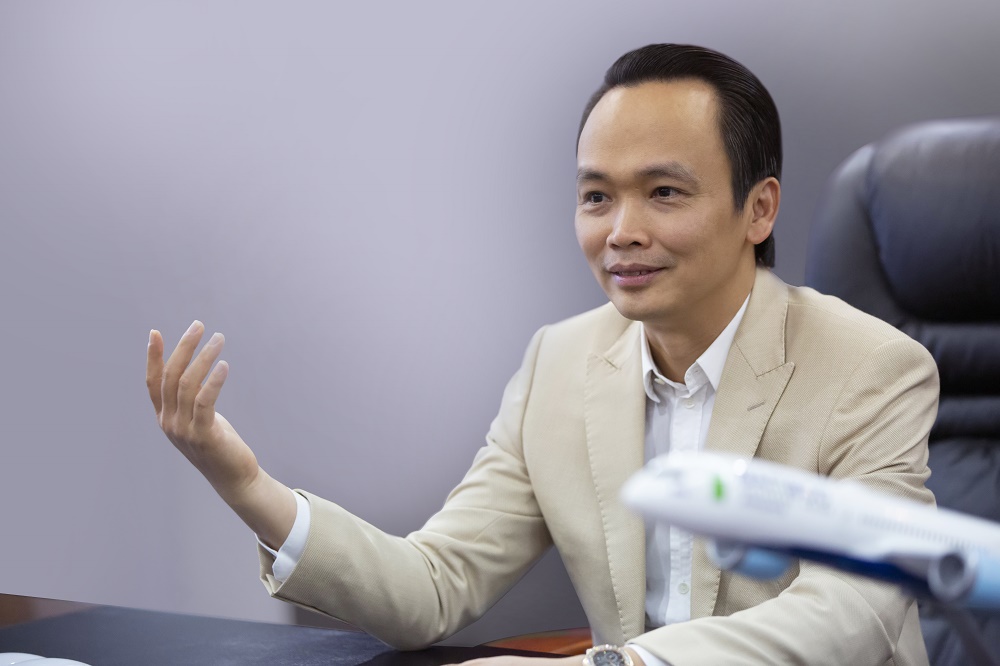 Economy Chosun of South Korea has just published on the front page the talk with Mr. Trinh Van Quyet, Chairman of FLC Group and Bamboo Airways, about the Airline’s strategies and upcoming plans.

“What impressed me most was Mr. Trinh Van Quyet’s wide forehead, sharp and deep eyes. I was drawn to the story of his career path, business philosophies as well as his endless passion on aviation,” Economy Chosun’s reporter wrote.

Running a business is similar to climbing a mountain

Talking about the decision to change his job from a lawyer to a businessman, Mr. Trinh Van Quyet said that the job of lawyer is highly respected in Vietnam, like in Korea and the United States. However, being a businessman is the better choice to “change the economy”.

“In Korea, Chairmen of big corporations like Samsung, Hyundai, Lotte, Daewoo, etc. are not lawyers. However, I appreciate my knowledge of the law which has helped me as well as FLC Group start up, develop and achieve success like today,” he said.

The Chairman mentioned the factor of “luck” when talking about the “secret” to help FLC Group grow steadily over the years. He entered the real estate market when it was blooming with rapid development. Now, he is also gradually conquering the aviation industry when it is being considered to have great potential.

“In my opinion, running a business is similar to climbing a mountain, and FLC Group has not reached its peak yet. We need to continue expanding our investments in other sectors to generate profit. This is probably a natural rule in the development process of every company or corporation in the world.

No money to waste

Answering on the decision to choose aviation at this time, Mr. Trinh Van Quyet said Bamboo Airways would be the last part connecting with FLC Group’s current resorts and golf courses all over Vietnam, creating a synergy of 5-star quality factors.

“I am a careful and perfectionist person. Every decision of mine is carefully made. 2018 is just a milestone of Bamboo Airways. Its foundation started to be built 4 years ago. With the sensitivity, I realized that Vietnam’s aviation market is extremely potential,” he said.

However, to compete in a harsh environment, FLC Group and Bamboo Airways have pursued the strategy of “Do big things” from the beginning. As a result, after less than a year, the Airline has signed contracts to buy 50 Airbus A321neo narrow-body aircraft and 30 Boeing 787 Dreamliner wide-body aircraft for its standardized fleet.

“FLC Group does not waste any single dollar, especially when a plane is worth millions of dollars,” Chairman of Bamboo Airways emphasized.

After Bamboo Airways was established, the next problem posing was competitive strategy. While former airlines focus on big cities like Hanoi, Ho Chi Minh City, Danang, etc. Bamboo Airways expands its network to local attractive tourist destinations in Vietnam, especially where FLC Group’s 5-star quality hotels and resorts are located such as Binh Dinh, Thanh Hoa, Quang Ninh, etc. After more than 4 months in operation, as for now, Bamboo Airways has exploited more than 3,000 absolutely safe flights with the highest OTP rate (92%) in the aviation industry of Vietnam.

“If you fly to a city where FLC Group’s hotel and resort is located, you will immediately think of Bamboo Airways and 5-star quality services,” Mr. Trinh Van Quyet affirmed.

“We will make every effort to turn Bamboo Airways into a 5-star airline meeting international standards of aviation certified by APEX in the next 3 to 5 years,” said Mr. Trinh Van Quyet.