The MoU is expected to strengthen the cooperation between Bamboo Airways and reputable partners in Australia, promoting the exploitation of Vietnam – Australia direct route.

On November 26, under the witness of Deputy Prime Minister of Vietnam Trinh Dinh Dung, Ambassador Extraordinary and Plenipotentiary of Vietnam in Australia Ngo Huong Nam and Director General of the Civil Aviation Authority of Vietnam Dinh Viet Thang, Bamboo Airways carried out the MoU Signing Ceremony with RMIT University and Melbourne Airport in Australia. 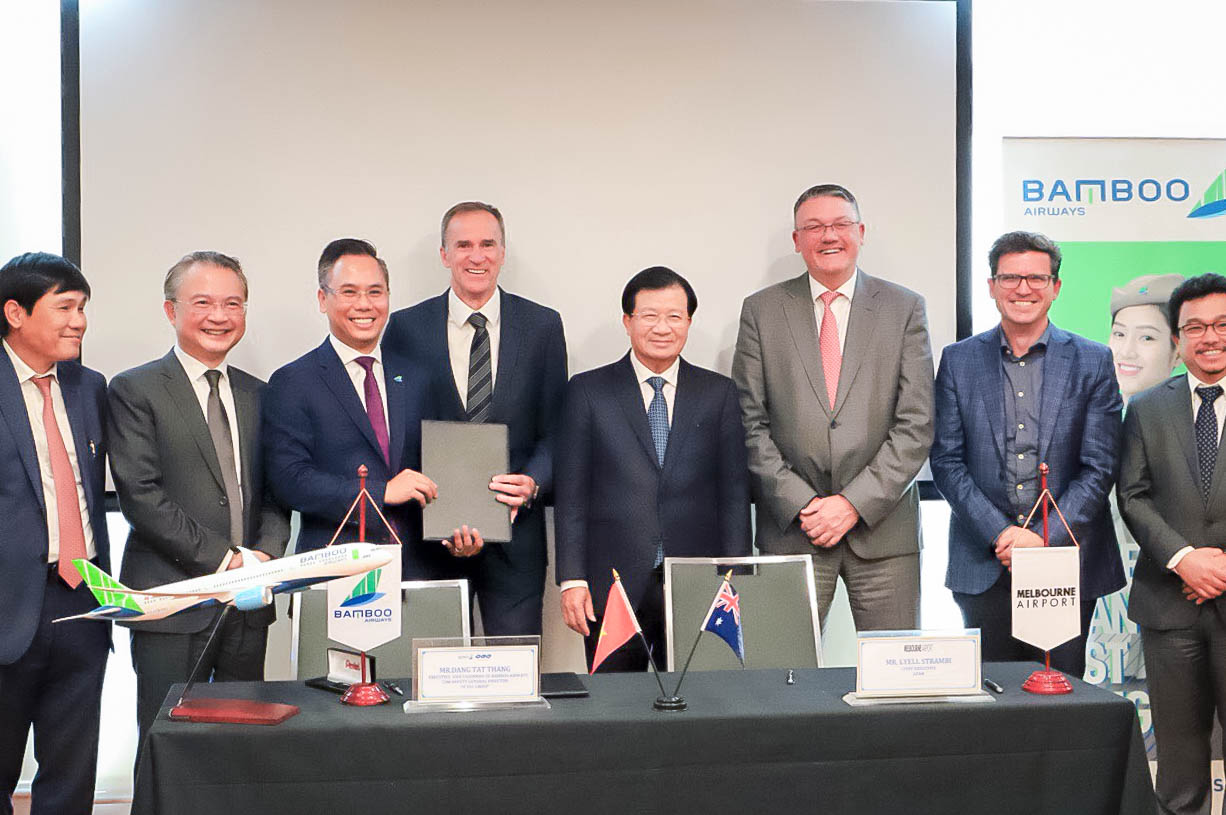 According to the MoU on the promotion of Hanoi – Melbourne direct route, Melbourne Airport will support Bamboo Airways in form of legitimate incentives, such as fees for ground handling service, navigation, airport representative office and co-branded marketing activities, etc.

Simultaneously, Melbourne Airport commits to promote conditions of the direct route’s operation at high level of safety and security. Information on air traffic and tourism projects between Vietnam and Australia will also be regularly exchanged and provided. 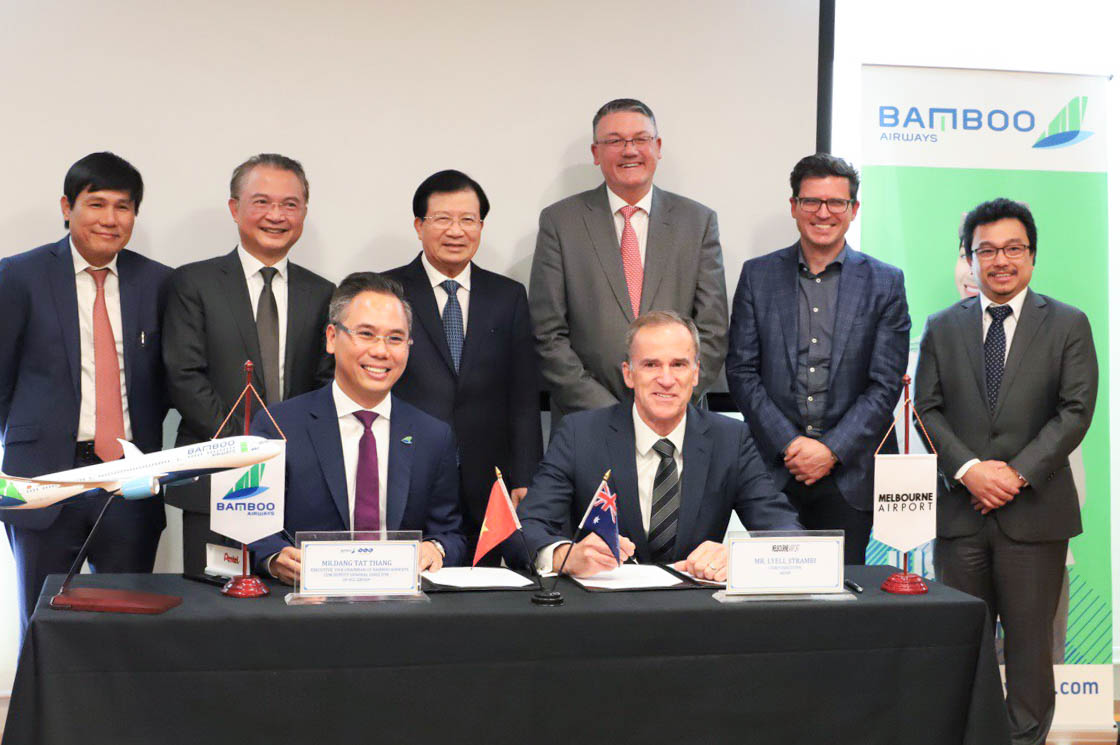 Melbourne Airport is the second busiest airport in Australia which operates 24/7, and it is also one of the important gateways of Asia – Pacific.

“We highly appreciate Bamboo Airways’ plan. We are willing to cooperate with the Airline to support the operation of Hanoi – Melbourne direct route”, said Mr. Lyell Strambi, Chief Executive Officer of Melbourne Airport.

On November 26 morning, Bamboo Airways signed an MoU with RMIT University – one of Australia’s leading pilot, aviation and aerospace engineering training centers. The MoU opens up opportunities for bilateral cooperation in the fields of aviation, aerospace and transnational education, creating a common vision for cooperation and qualifications recognized by both Australia and Vietnam. Cooperation sectors of priority include training commercial pilots, aviation management and aircraft engineers. 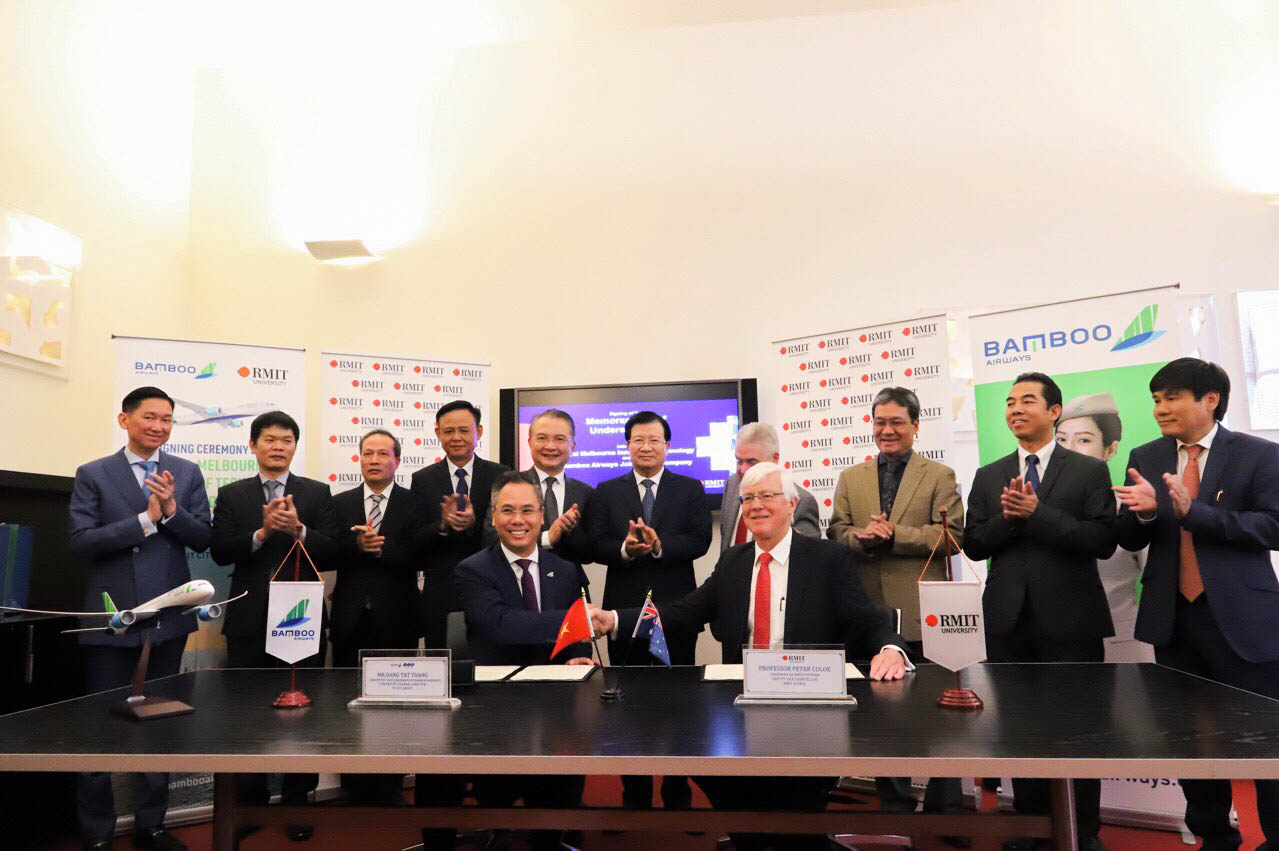 The cooperation with RMIT proves the sustainable development orientation of Bamboo Airways of becoming a 5-star airline, with strategic vision of standardizing and taking initiative in human resources when Vietnam is “thirsty” for aviation personnel. At the same time, the collaboration also provides many academic and career opportunities to young talents eager to develop themselves in this fascinating field.

Speaking at the event, Mr. Dang Tat Thang, Executive Vice Chairman of Bamboo Airways said: “Taking the initiative in human resources is among important conditions for Bamboo Airways’ sustainable development on its roadmap to become a 5-star airline. I believe that RMIT – one of the leading aviation training centers in Australia is Bamboo Airways’ ideal partner in the process of consolidating specialized personnel which meet international standards.”

The relations between Vietnam and Australia in recent years have witnessed many great achievements, especially since the two countries upgraded their relationship to Strategic Partner in March 2018.

Australia is one of Vietnam’s important sources of tourists. Australian travelers to Vietnam tend to stay longer and spend more than other foreign visitors. In 2018, the number of passengers taking direct flights between Vietnam and Australia reached 562 thousand. In the first 9 months of 2019, it is estimated that Vietnam welcomed 446 thousand visitors from Australia, an increase of 5.5% on-year.

With high-quality education system, favorable living environment, employment and immigration opportunities, priorities in visa procedures, Australia is one of the top destinations in the world, attracting thousands of Vietnamese people.

The current direct routes between Vietnam and Australia are also experiencing a steady and strong growth. For example, direct flights on Ho Chi Minh city – Melbourne route transported 259,000 visitors in 2018. In the first 9 months of 2019, this number reached 208 thousand, up 7.7% on-year.

Recognizing the great potential, Bamboo Airways plans to operate Hanoi – Melbourne direct route by Boeing 787-9 Dreamliner which will join the Airline’s fleet in the QIV/2019. This is a modern wide-body aircraft which is fuel efficient, suitable for long-haul flights across continents.

It’s expected that after being put into operation in QII/2020, Bamboo Airways’ Hanoi-Melbourne direct route will pave the way for the Airline’s upcoming direct routes to other locations in Australia in the future.