Strategic expansion to the Swinging City

This is the opening event in the Europe trip of Prime Minister Pham Minh Chinh from October 31. In particular, Prime Minister Pham Minh Chinh leads a high-ranking Vietnamese delegation to attend the 26th United Nations Climate Change Conference of the Parites (COP26) and visit the UK and France. The working visit includes many activities aiming to enhance strategic partnership Vietnam – UK and Vietnam – France, among which are meetings with UK leading enterprises, forums on investment and business in Vietnam. 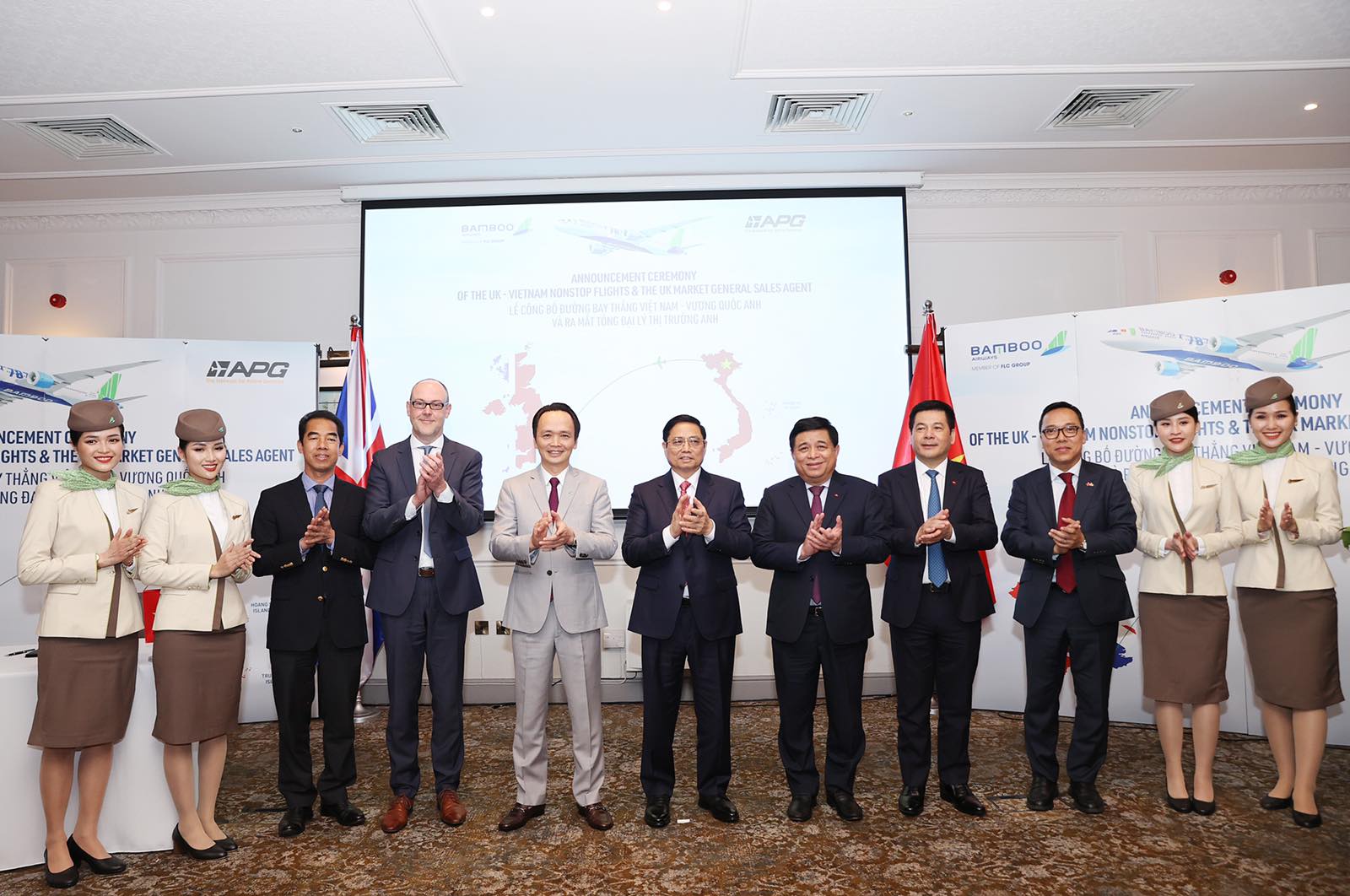 Starting from January 2022, Bamboo Airways plans to conduct regular nonstop routes connecting the capital Hanoi, Ho Chi Minh City of Vietnam, and the capital London (UK), with 6 round flights per week and a bulk-up frequency depending on market demands.

The airline plans to operate nonstop flights from/to Terminal 2 at Heathrow Airport, enhancing the connectivity between two key airports in Vietnam and the UK’s largest and busiest airport.

These routes will be operated by the modern wide-body Boeing 787-9 Dreamliner aircraft with exceptional fuel efficiency and numerous outstanding utilities.

Speaking at the event, Mr. Nguyen Hoang Long, Ambassador Extraordinary and Plenipotentiary of Vietnam in the United Kingdom and Northern Ireland, said: “ The visit of Prime Minister Pham Minh Chinh to the UK is a political event of history. This is an opportunity to strengthen the reliable and fruitful bilateral ties between Vietnam and the UK. One of seven strategic focuses of enhancing Vietnam – UK relations is to promote economy, trade, investment, and tourism between the two countries. Therefore, Bamboo Airways’ operation of Vietnam – UK nonstop routes is among the utmost strategic focuses of bilateral relation.”

Vietnam Embassy in the UK expects the nonstop routes will contribute to the development of trade and people-to-people exchange between the two countries, simultaneously serving over 100.000 Vietnamese diasporas in the UK.

Mr. Trinh Van Quyet, Chairman of Bamboo Airways, expressed: “The first-ever Vietnam – UK nonstop route operated by a Vietnam-based carrier will reaffirm the exceptional operation ability and superb facility of the domestic airline, as well as the entire Vietnamese aviation industry. This will be vivid proof of the ability to fulfill world-class standards, thus gradually making a name for Vietnamese airlines in the fiercely competitive international market.” 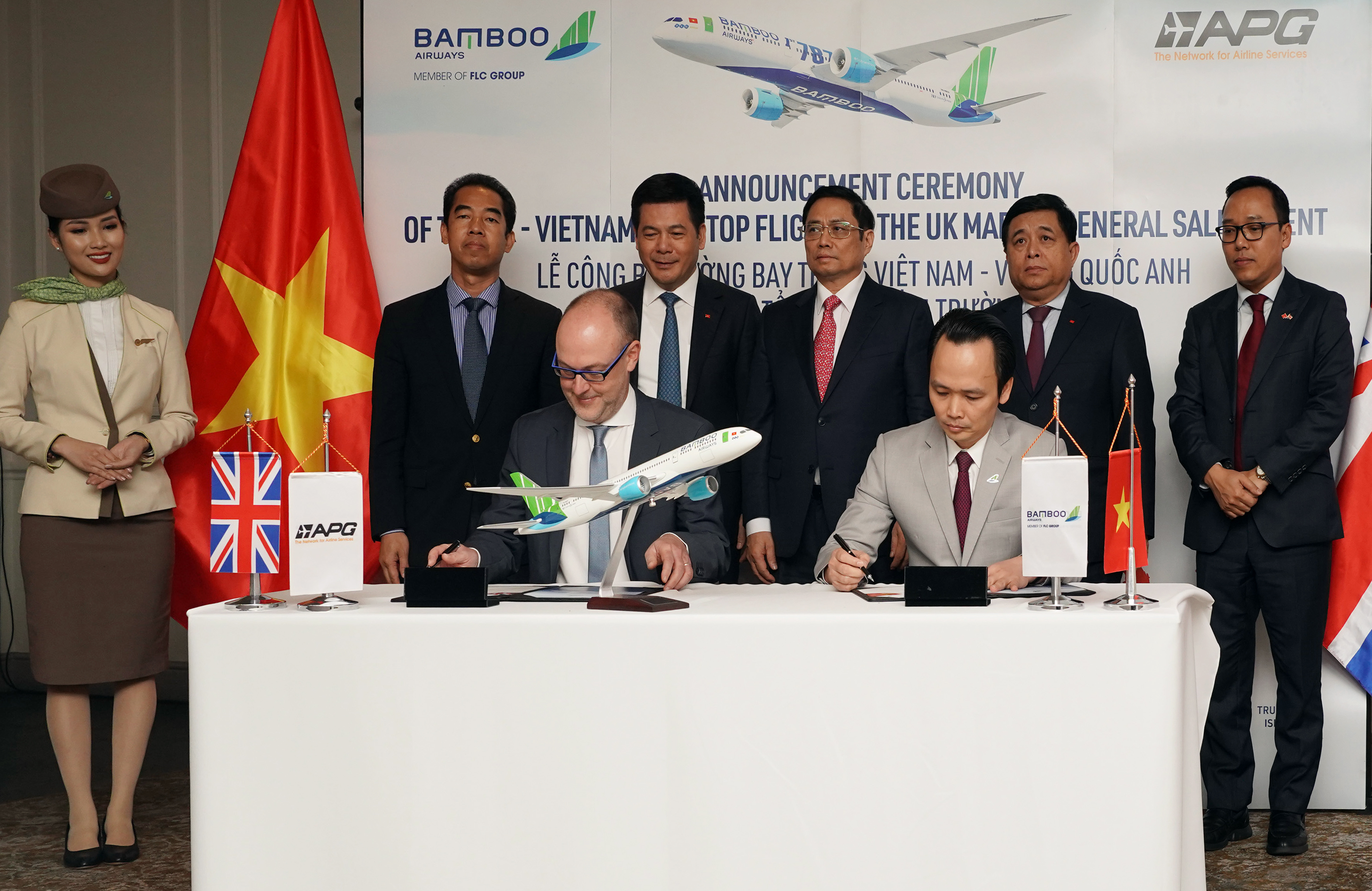 The leading airline GSA in region

Within the event framework, Bamboo Airways officially introduces APG UK as its General Sales Agent in the UK market. Representing over 25 airlines, APG UK is a part of the worldwide APG network offering optimal aviation solutions and one of the region’s leading airline GSA representation organizations.

As the General Sales Agent of Bamboo Airways, APG UK pledges to provide maximum support for policy and procedure with authorities, sales and marketing promotion, market research, customer service and operation management in the UK, etc.

Dang Tat Thang, CEO of Bamboo Airways, emphasized: “We believe APG UK will significantly narrow the gap between Bamboo Airways and potential customers in the UK as well as Europe. This is one of the crucial factors assuring the commercial success of Bamboo Airways’ nonstop flights connecting Vietnam and the most potential markets in this region.”

Richard Burgess, President of APG, commented: “We are delighted to have been chosen by Bamboo Airways as their UK partner to work together on successfully launching Bamboo Airways’ flights to London, building their UK sales, and bringing the high quality and customer-focused Bamboo Airways brand to a new audience in the UK.” 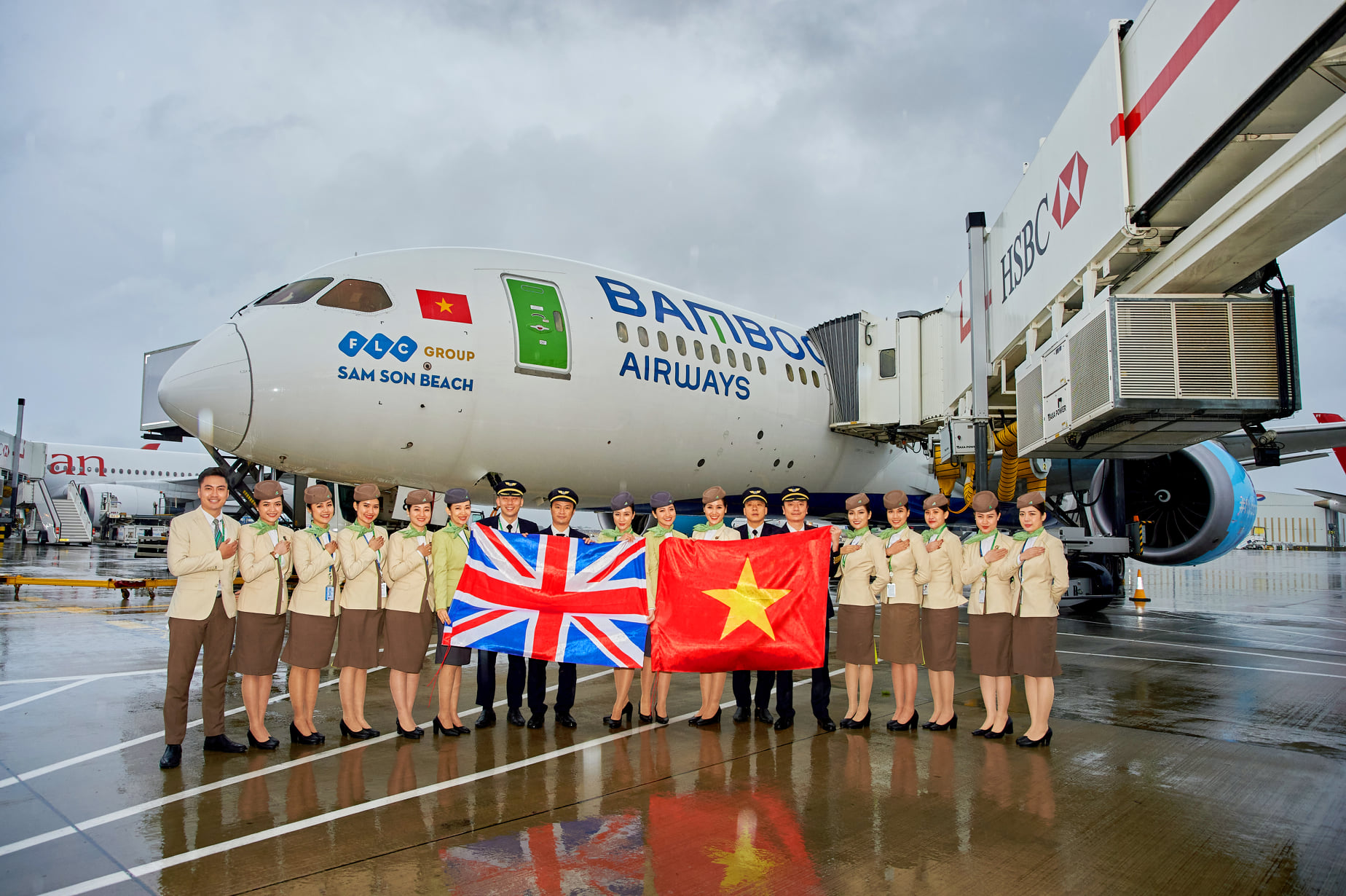 As the heartbeat of the UK and Northern Ireland, London is considered one of the strategic destinations in the European expansion roadmap of Bamboo Airways. This Vietnam – UK nonstop route is the stepping stone to further outgrow the airline’s network connecting Vietnam and leading global economies including Germany, France, Belgium, Netherland, etc., and furthermore the Southern Europe region.

Along with recent comprehensive developments, the Vietnam – UK strategic ties have been substantially deepened, especially after the UK – Vietnam Free Trade Agreement in December 2020.

After 45 years of diplomatic relations, Vietnam and the UK have made historic breakthroughs in the field of economy and trade. In 2018, two-way trade turnover reached $6,74 billion, increasing 9,5% compared to the same period last year. With a total registered capital of $3,75 billion, the UK ranks 16th among 130 countries and territories investing in Vietnam.

Regarding people-to-people exchange, there are more than 100.000 Vietnamese diasporas in the UK, of which 60% are living in London, with an upward proclivity. According to the Vietnam National Administration of Tourism, Vietnam welcomed over 315.000 UK tourist arrivals in 2019, a 105% growth since the previous year, making it the second European country with the highest tourist number to Vietnam.

A Vietnam – UK nonstop route directly operated by a Vietnam-based carrier is expected to enhance comprehensive bilateral relations between the two countries in the field of diplomacy, economy, and social- culture.