“Now is the right time to broaden and deepen our economic and trade partnership to celebrate the 25th anniversary of the normalization of diplomatic ties in 2020,” US Ambassador Daniel J. Kritenbrink emphasized at the “2019 US – Vietnam Business Summit: Celebrating 25 Years of Trade and Investment” on May 10 in Hanoi. 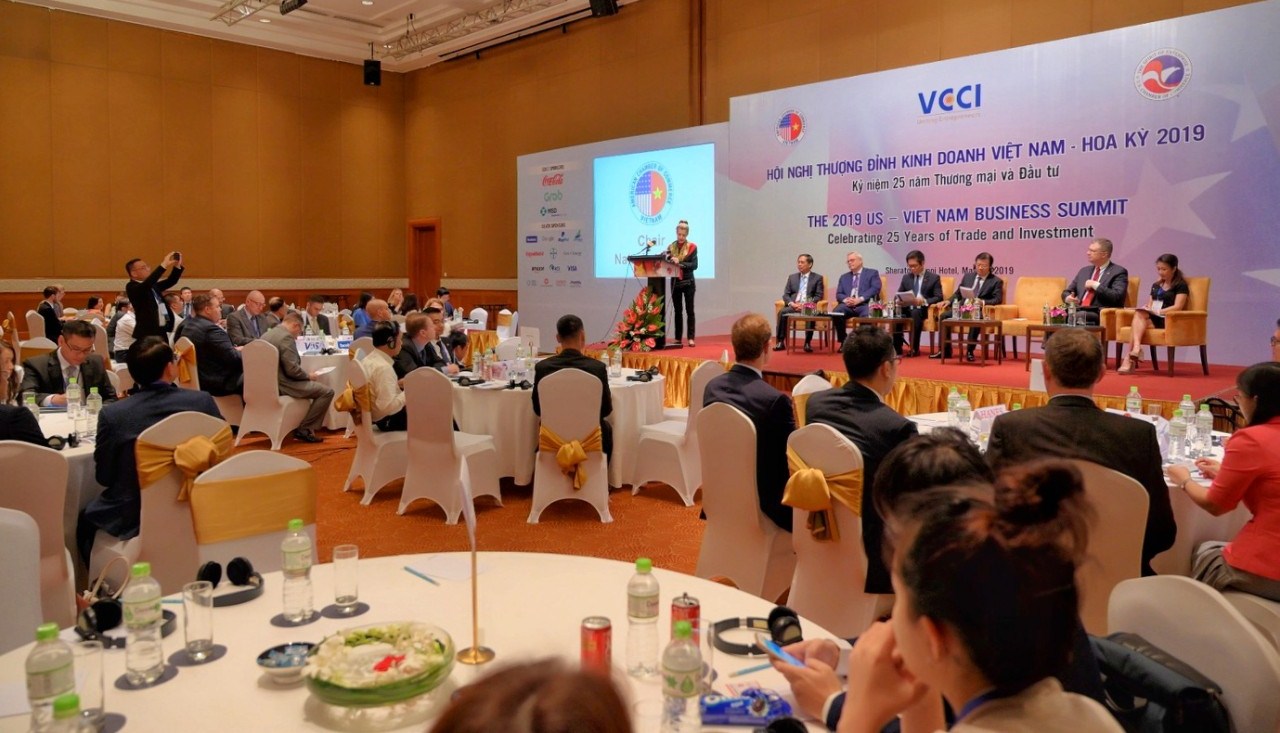 Speaking at the Summit, Deputy Prime Minister Trinh Dinh Dung affirmed the U.S.-Vietnam relationship is enjoying a rising tide. The comprehensive partnership has been strengthened by historical events such as Presidential or Prime Ministerial visits. Notably, Prime Minister Nguyen Xuan Phuc was the first ASEAN leader to officially visit the U.S. after President Donald Trump took office, and President Trump was the first US President to visit Vietnam twice in a term.

He stressed that Vietnam’s persistent policy is to regard the US as a key partner, wishing to further promote relations with the country, in which economic, trade and investment cooperation continues to be the foundation and driving force of the bilateral relationship. 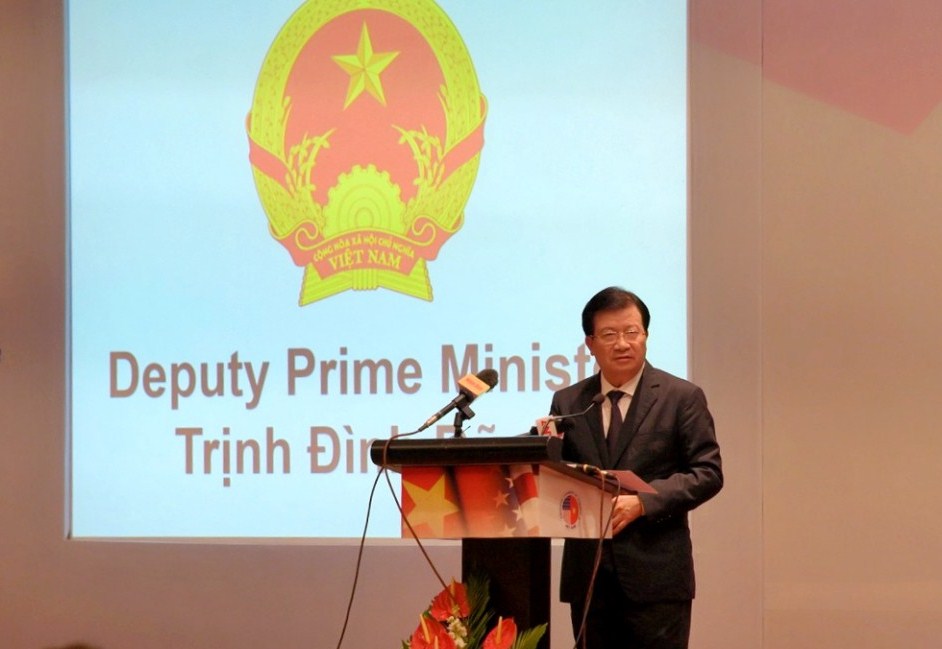 Over the last years, the U.S. has continuously been one of Vietnam’s leading trade partners with the two-way trade balance increasing by over 130 times since 1994 (from USD450 million in 1994 up to nearly USD60 billion in 2018). Additionally, Vietnamese and U.S. businesses signed many commercial contracts which were worth more than USD21 billion in the second U.S.-North Korea Summit in Hanoi recently.

Regarding the strong trade partnership between the two countries, Ambassador Daniel J. Kritenbrink stressed that’s an extraordinary success. In 1994, Vietnam was America’s 95th largest source of imports. Today, it ranks 12th. The United States is now Vietnam’s largest export market, and Vietnam is one of America’s fastest growing markets worldwide.

Ambassador Daniel J. Kritenbrink also said, “Now is the right time to broaden and deepen our economic and trade partnership, and to elevate conversations about the comprehensive economic relationship between the U.S. and Vietnam to celebrate the 25th anniversary of the normalization of diplomatic ties in 2020,” 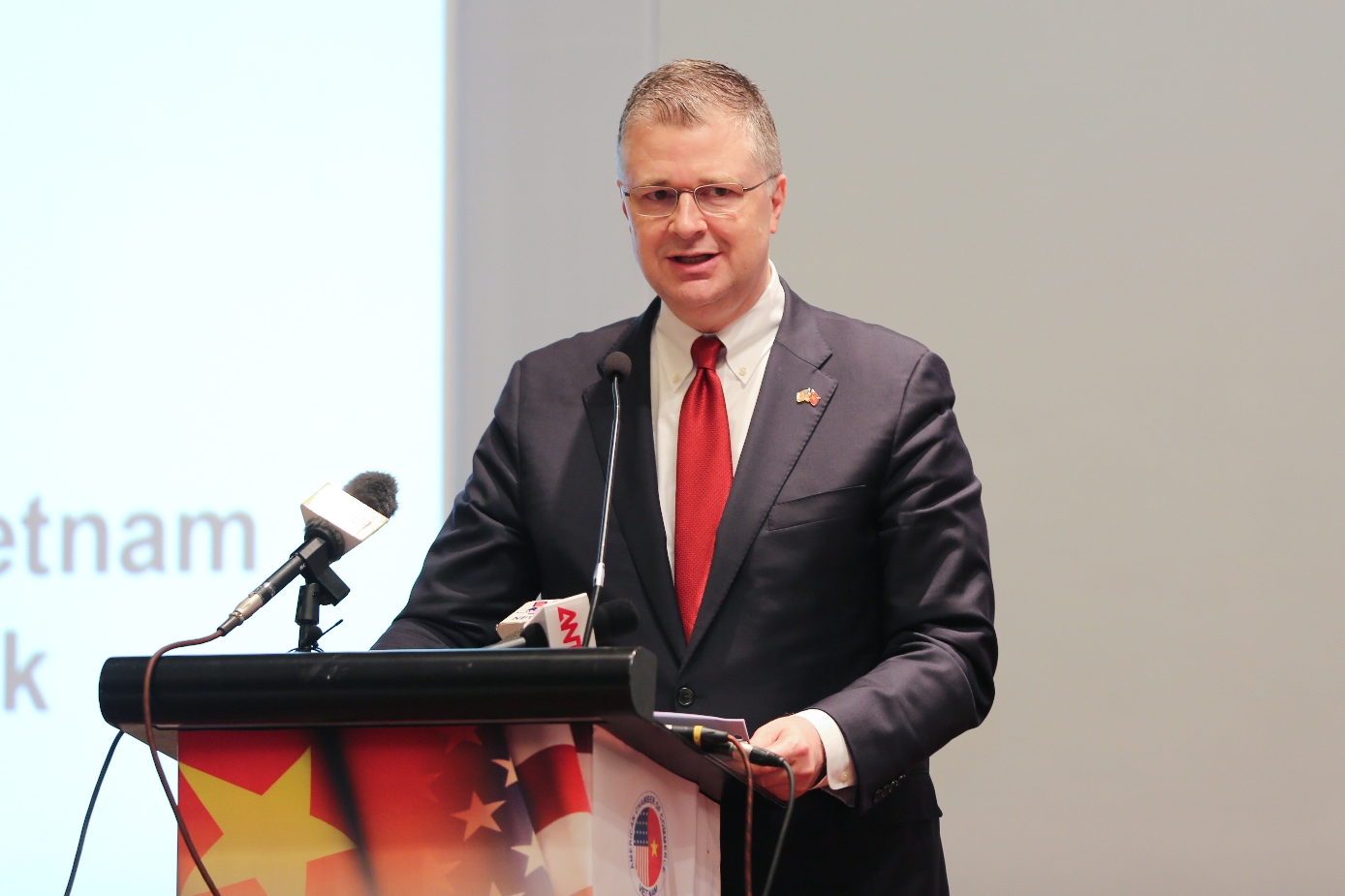 He expressed the eagerness to partner with Vietnam to pursue its digital economy goals. Accordingly, he urged Vietnam to maintain a predictable investment and tax environment not just for Americans, but for all foreign companies.

Cooperation to promote the creative economy

The Summit focused on discussing a number of key issues, including promoting investment and sustainable policies, boosting the development of the digital and internet economy, addressing the needs of power development, and how Vietnam can benefit from global current trade movements.

Dr. Vu Tien Loc – Chairman of VCCI said, “Sustainable development, innovation and integration are currently the most important keywords in Vietnam’s development strategy. Vietnam is moving towards a higher quality, more sustainable investment and trade structure, and the U.S. is a leading partner with Vietnam to reach this goal,” 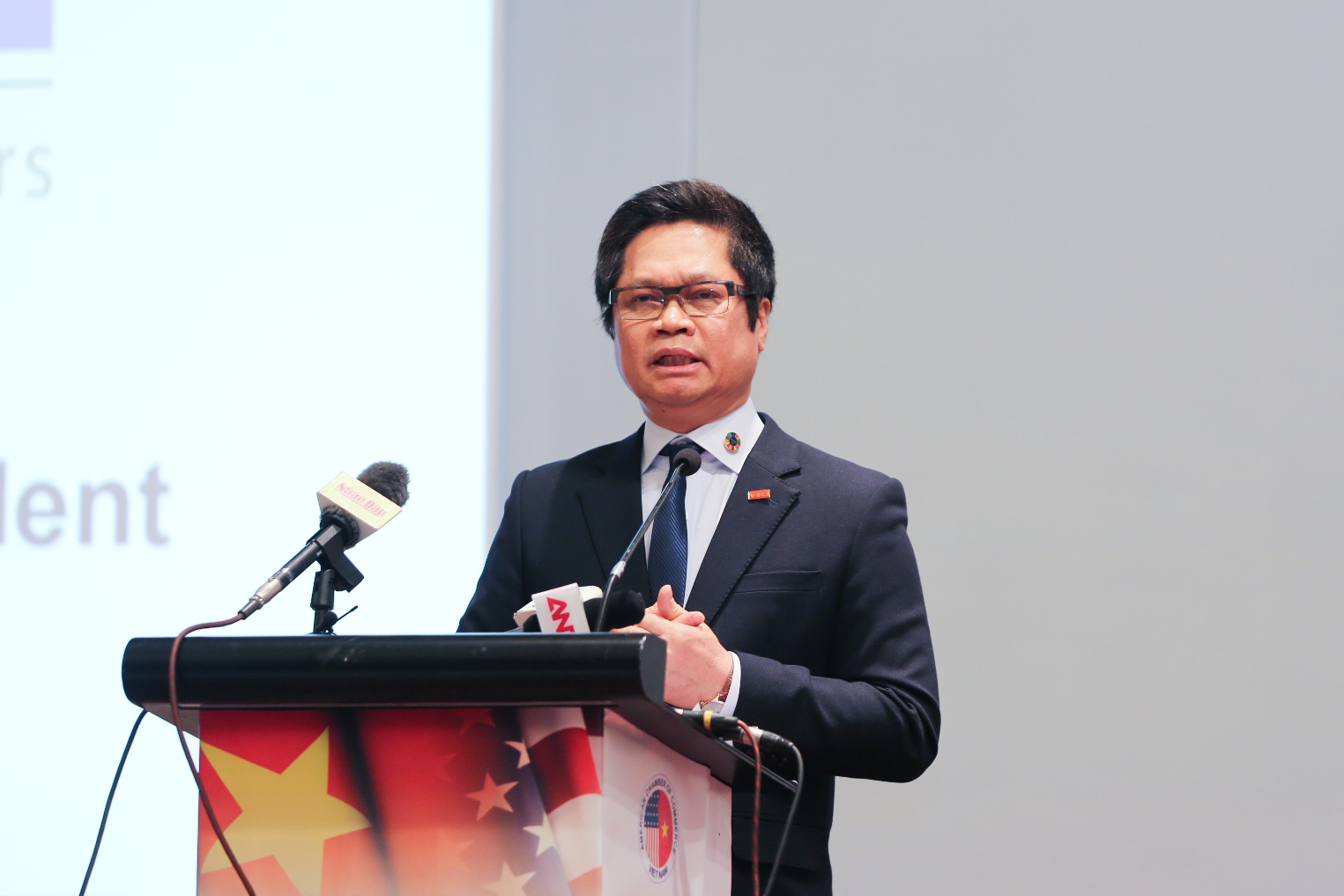 Vietnamese and US businesses have cooperated to carry out potential projects in the fields of manufacturing, processing, clean energy, aviation, digital technology, health care, pharmaceuticals and many others. In particular, the leading role of large corporations in global value chains is undeniable; and there is also a significant contribution of micro, small and medium enterprises (SMEs), start-ups, etc.

Reaffirming that the FDI flow from the U.S will be closely linked with Vietnamese enterprises who are participating in global value chains, Dr. Vu Tien Loc emphasized: “FDI enterprises play an integral part in Vietnam’s sustainable development vision. We support initiatives to upgrade and complete free trade frameworks between the two countries to benefit both sides,”

“We hope Vietnam, with the cooperation with US businesses, will not only become the world’s manufacturing hub but also welcome “silicon valleys”, contributing to shaping the country’s economy. The cooperation between Vietnam and Boeing won’t limit to aircraft contracts, furthermore Vietnam might participate in the global manufacturing chain of Boeing,” said VCCI Chairman. 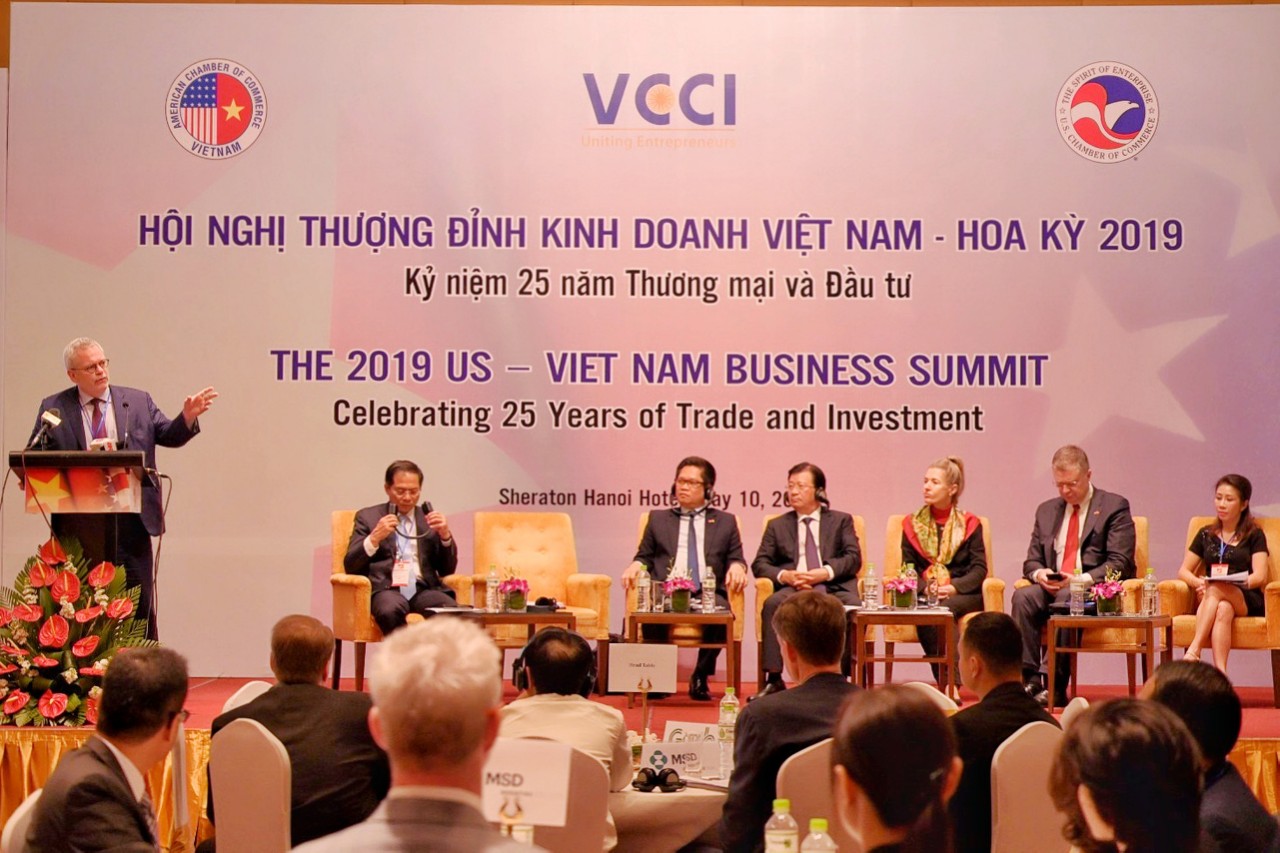 At the Summit, the U.S. Chamber of Commerce also announced a detailed plan with different recommendations to strengthen the trade relationship based on the existing Trade and Investment Framework Agreement (TIFA) signed between the two countries. TIFA covers the digital economy, customs and trade facilitation, power infrastructure and many others.

“We believe the long-term goal of the U.S and Vietnam is to have a free trade agreement between the two countries,” Mr. Freeman concluded.

The U.S. Chamber of Commerce, the American Chamber of Commerce in Hanoi and VCCI pledge to further promote the cooperation, sharing best practices and information among shareholders, supporting trade and investment promotion to boost the economic growth of both countries in the near future.